The Economist sees green in 2009 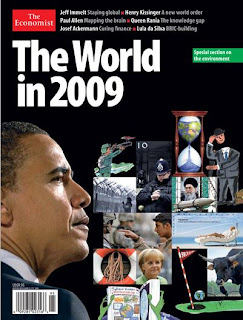 The Economist recently released its 23rd edition of its annual expedition into the coming year. This year, The Year in 2009 has a special section on the environment along with other articles that with some social and environmental elements as well. Obama is highlighted, along with the economy and some big predictions in international politics. I've been reading The Economist since high school so its been great to see their collection of environmental articles grow over the years. Climate change has certainly fueled the latest wave of articles but they've also had many contributions on biodiversity, toxins, and environmental justice. Their articles may not be signed, but their contributions are certainly leaving a mark on the minds of political and business leaders around the world as they put key social and environmental topics on the global radar.