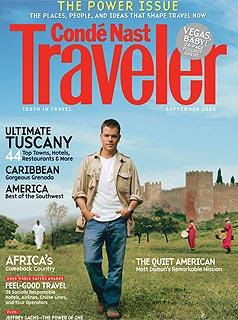 Conde Nast Traveler has put out an outstanding September 08 issue featuring many articles and resources on socially responsible travel. The feature article showcases Matt Damon's work with H2O Africa and his recent project Running the Sahara which he both narrated and produced. Other articles include The Power of Travel, pioneers in the field of sustainable travel including Anderson Cooper, War and Peace about the role travel plays in healing a country after war, and a listing of the 38 winners of their 2008 World Savers Awards. Other Conde Nast efforts include awareness and fundraising for Population Services International and the establishement, as part of their Make a Difference travel initiative, of the Conde Nast Traveler Five & Alive Fund to improve the health of children under five. Not bad for a mainstream magazine. Conde Nast has long promoted travel that treads lightly on the planet, but the looks of it, they're going to stay on that path.