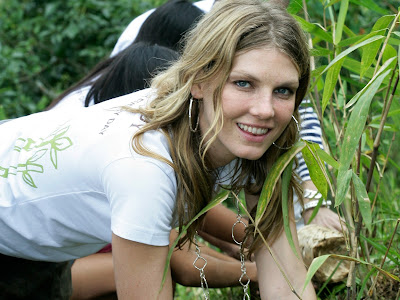 Angela Lindvall planting bamboo in Bali Indonesia
Angela Lindvall is an American model, actress, and environmentalist. Lindvall was born in Oklahoma and grew up inp in Missouri. She was discovered at age 14 at a Kansas City fashion show and signed to modeling agency IMG.

Considered a modern supermodel, Lindvall has appeared on the cover of ELLE, Harper's Bazaar, Marie Claire, Numero, Vogue, I-D and W. She appeared in ad campaigns for designers including from Calvin Klein, Chanel, Christian Dior, DKNY, H&M, Hermes, Louis Vuitton, Prada, Valentino, and Versace. Lindvall also appeared in a Sports Illustrated Swimsuit Issue and has stomped the runway in several Victoria's Secret fashion shows from 2000 to 2008. She hosted Project Runway: All Stars and has appeared in several movies and television shows including Alter Eco and Hawaii Five-0

Lindvall is an outspoken environmentalist. She founded her own nonprofit called the Collage Foundation which promoted sustainability with youth. Lindvall was named "Best Dressed Environmentalist" in 2004 and 2005 by the Sustainable Style Foundation. In 2009 she partnered with Edun to design a line of clothing with all proceeds going to Green Cross International. She later launched her own jewelry line inspired by sustainability and cultural diversity with John Hardy in October 2011.